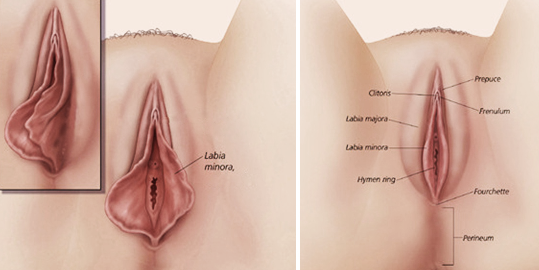 Labiaplasty is a procedure that reduces the Labia Minora and is commonly performed to relieve women of symptoms from physical discomfort to unsightly appearance of the labia. These can vary from relieving pain from cycle riding or sexual intercourse to self-consciousness caused by itching and chafing due to the twisting or traction of the labia.

A Labiaplasty aims to reduce the size of the Labia Minora which protrudes and becomes slack with childbirth and ageing. Labiaplasty reduces or improves the appearance of the Labia so that they no longer be prominent or be seen in a bikini/bathing suit.

Trimming the labia is the most common procedure in which excess tissue is removed and sewn up. Another procedure is the ´Wedge resection´ which creates a natural symmetry after the removal of a triangular section of tissue. During surgery, larger or uneven inner vaginal lips are cut and shortened using specialized scissors, a laser or a scalpel. The appropriate incision location depends on many individual factors, including the configuration, texture and size of the labia minora. In addition, the labia majora, on the outside of the body, can be reduced with either surgery or liposuction, if desired.

Anaesthetic will be administered as local with or without sedation according to individual patient's needs. It is an outpatient procedure. It is recommended to not have sexual intercourse the night before your labiaplasty surgery.

Generally similar to most other surgical procedures: bleeding, infection, wound dehiscence and haematoma. Extensive resection can result in dryness and scarring of the vaginal opening and possible pain during sexual intercourse. But all these risks and complications can be minimized by choosing a qualified and experienced cosmetic surgeon.

A week off from work is recommended and patients can help reduce swelling and discomfort with ice packs for five minutes worn beneath comfortably elasticated undergarments. Avoidance of intercourse and use of tampons is recommended for at least six weeks after Labiaplasty, although some swelling may persist for up to three months after the procedure.

Cosmetically, shorter Labia will no longer hang down below the hairline of the Labia Majora and patients generally have relief from symptoms caused by the twisting and tugging of the Labia with a satisfaction rate of over 80%.

Costs do vary, so consult with your cosmetic surgical professional, but 2018 quotes have an average of £2,500.

For your free consultation contact us by completing our online inquiry form or call us on 0191 567 2900.

Book a consultation or request a call back
Katie needed ear lobe correction after removing the 2cm ring which she had for years. The procedure was performed under local anaesthetic and she is extremely happy with the outcome. Earlobe reduction, repair or correction is getting more popular over the last decade and is a rather delicate procedure with...
Read more of Katie's testimonial