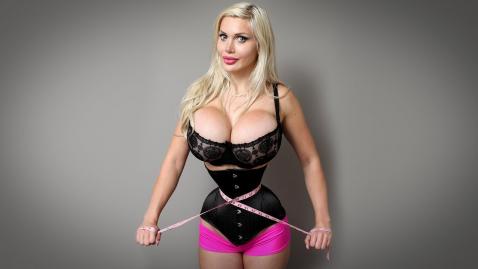 We all like to think of ourselves as a role model to someone, but a 27-year-old woman from Carolina has gone one step beyond to imitate one of her life-long heroines.

In an attempt to have life imitate art, “Pixie” from North Carolina has had over 100 operations including a jaw break, V-line bone shaping in addition to having several ribs removed, four boob jobs and bum lift (while adding numerous other procedures such as liposuction and the ever controversial Labiaplasty). In fact, the number of procedures undertaken is so controversial, she decided to travel to South Korea’s rapidly burgeoning Cosmetic Surgery capital Seoul, to have work done.

Having always had a desire to look like one of her comic book heroines, and in an attempt to start her own comic strip crime fighting adventures to rival Wonder Woman, Pixie had her first Aesthetic Surgery experience back in 2011 and became hooked from then on when she saw the result. She described her experience as “an adventure creating my own body with my own imagination.”

Pixie is creating cartoon characters that morph her looks into the character she had always felt was inside her, just itching to escape and have adventures of her very own. To that effect, the success of her many physically altering procedures aided and abetted by South Korea’s finest surgeons, has spurred Pixie on to register with the ¨Plastics Of Hollywood¨ talent agency which she hopes will both compliment her and her newly created character in transforming more self-penned comic books into a cinematic reality; just like the recent re-imaging of the Marstons-Byrne classic character made famous by the DC comic brand.

‘I am turning my life into a story where I’m the superhero with fact and fiction based on me and showing my real-world struggles.” With over 100 surgical procedures to date, she has received millions of votes, especially after the complete bone and facial reconstruction to mimic her heroine that sounds the stuff of real life stoicism.

‘’It was a risky procedure as the surgeons needed to be careful with all the muscles and nerves within the face. I could not swallow with all the plastic and breathing tubes in my mouth; every 20 minutes my airways needed to be suctioned to remove blood and saliva.”

In true heroine tradition, Pixie doesn’t make a big deal of all the surgery she has encountered as long as the end result has been worth it - despite all the risks she’s run over the years including potential paralysis (which thankfully thanks to skilled surgery and intensive 24 hours post-operative aftercare was totally avoided). Who knows what the future holds for Pixie; we may yet see her in a literal face-off against the captivating modern-day Wonder Woman, Gal Gadot, as they battle for top billing with their respective interpretations and recognition from the worlds top comic book aficionados and no doubt, with a little help from the Cosmetic Surgeons.