Why do Men Lose their Hair ?

The hair loss industry makes around 1.5 billion$ worldwide and this is only growing upwards at an exponential rate. Millions of men have been facing this major issue and a search on the internet will throw up all kinds of solutions for baldness and hair loss that range from the bizarre to the absurd.

But what causes men to lose their hair? 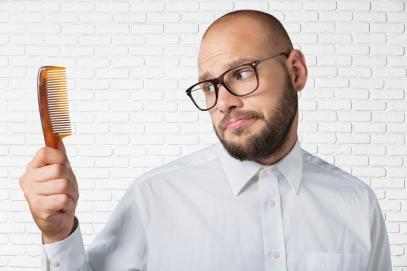 Let's talk about 3 friends, John, Alex and Thomas. All 3 are suffering from some form of Hair Loss. Let's see their stories and understand as to why men lose their hair in general.

John like other 1% men lost his hair due to Scarring Alopecia which can be caused by various skin problems due to scarred follicles that cannot regrow hair. It can be treated by topical steroids. If topical steroids doesn’t limit the hair loss then John will go for hair restoration surgery.

Alex like the majority of men (98%) is losing his hair due to Male Pattern Baldness or Androgenetic Alopecia. It is a progressive condition of hair loss. In its worst stage of baldness the hair is receding all the way to the base of the head and the only thing left is a horseshoe shape. Its initial stage can be treated by topical treatments such as Rogaine, Propecia. Low level laser therapy is also a solution to treat hair loss. But the permanent solution is Hair transplant surgery.

James had a severe car accident and has lost his hair because of cuts in his head. About 1% men lose their hair due to Traumatic hair loss which result from cuts, burns and repetitive surgery. It can happen to anyone at any age which can be treated by hair transplant surgery.

Why do Men face more hair loss compared to women?

It's true that men are more likely to lose their hair than women, mostly because of Male Pattern Baldness which is scientifically known as Androgenic Alopecia. Alopecia means loss of hair and the hormone responsible for baldness is androgen hormones (steroid male sex hormone), that’s why it is named as Androgenetic Alopecia.

About one out of three men experience hair loss by age of 45, and approximately 98% of men lose their hair due to male pattern baldness. About 25% of men who suffer with male pattern baldness begin the process before the age of 21 years. It is caused by a combo of genes and male sex hormones.

According to the UK’s National Institute for Health and Care Excellence (Nice), the condition affects 30% of white men under 30, increasing to around 80% of men over 70 (it occurs less in black men, and later and more slowly in Asian men). Its causes are well established but poorly understood by those of us who have it.

It is recorded that  men with thinning hair have high amount of the enzyme 5-alpha reductase than people with normal hair.  Actually this enzyme in hair follicle is responsible for converting the male sex hormone -testosterone into the form dihydrotestosterone (DHT), in both males and females. DHT is known to bind to hair follicles, thereby inhibiting  their growth, makes hair shorter and thinner and finally leading to hair loss over time. DHT affects hair follicles on the top of the head, essentially altering the protein makeup, which shuts down those follicles prematurely or  causes thickening of the scalp which forces the hairs to grow out thinner, and eventually stop growing completely. This is why so many men suffer from male pattern baldness. It generally doesn't happen with women due to them having a much lower amount of testosterone.Themale pattern baldness usually follows a classic pattern in which the hair recedes at the temples by leaving an M-shaped hairline in most severe case.

Undoubtedly the most common causes for hair loss is hereditary hair loss means Androgenetic Alopecia but some men may suffer from baldness due to following reasons:

Men lose their hair because women carry the gene and men inherit it.  Male pattern baldness is a recessive gene and women are always the carrier of recessive genes.. This sex-linked characteristic of baldness which genetically located on the X-chromosome, appears to be derived from the genetic makeup of our mother’s father.

Why don't women go bald as early as men?

Because the male sex hormone testosterone has the biggest impact on hair, women don’t lose hair the same way as they have a much lower amount of testosterone. However, women suffering from PCOS or other conditions can experience male pattern baldness, which is very distressing. But when women reach menopause, their levels of the female sex hormone estrogen drops, and the testosterone which they always had in their bodies starts to have more effect.This can lead to thinner hair growth for women, but it’s more equally distributed, rather than in a receding hairline as in men.

There are two ways to go about this- either bald or balding men all over need to accept this change or else ensure that they consult a well known, accredited and experienced cosmetic surgeon who has performed many procedures and has worthy testimonials to his name.

Dr Ashish Dutta the Chief Surgeon and Founder at Aesthetic Beauty Centre is a respected cosmetic surgeon and has successfully performed 750 procedures from 2002.

Book a consultation or request a call back
Facelift & Neck Lift Testimonial - A happy Patient.
Read more of 's testimonial