Advanced laser technology is to thank for one of this year’s most inspiring news stories.

Kim Phúc became a tragic symbol of the Vietnam war when, in June 1972, she was photographed as she ran naked, screaming, and terribly burned from a napalm strike on her village in the south of the country.

The photograph, taken by AP photojournalist Nick Ut, would later win the Pulitzer Prize and be regarded as one of the most haunting images to emerge from the conflict.

Now aged 52 and living in Canada, but still carrying the vivid wounds from that day, Kim has described as ‘heaven’ the treatment she is now receiving free of charge from a clinic in Miami, Florida.

Doctors there hope that state-of-the-art fractional laser technology will ameliorate not just the appearance of Kim’s scar tissue but the physical pain that has always come with it.

Fractional CO2 lasers work by creating thousands of tiny holes in the surface of the skin, in a formation customised to each patient. This causes the skin to tighten and in turn stimulates the production of new collagen which then heals, leaving a smoother and more elastic surface. 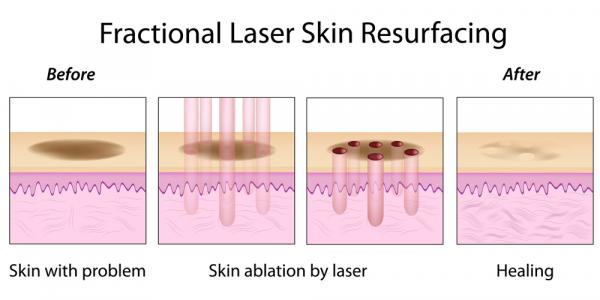 By softening the texture and improving the elasticity of the scar tissue, the doctors also hope to be able to improve Kim’s mobility, which has always been severely restricted by the tough web of scars that covers most of her back and left arm.

The Aesthetic Beauty Centre was one of the first clinics in this country to specialise in the use of this technology.

The majority of our laser treatments are used for cosmetic rather than medical purposes, helping people to regain their confidence through the improvement of wrinkles, acne scars, enlarged pores, sun damage and pigmentation abnormalities.

But it is impossible not to be inspired by the progress medical science continues to make and the life-changing applications now available for burn victims and others who have suffered as long as Kim Phúc.

Book a consultation or request a call back
Mr. Lisle underwent for FUE hair transplantation and received 1000 grafts. He is happy with the result as seen in the testimonial.
Read more of patient's testimonial