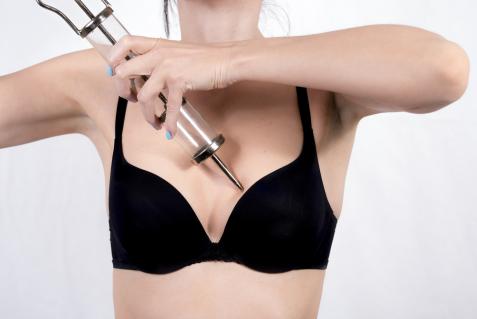 In a tale that sounds like it´s come straight out of a horror movie, an American cosmetic hospital has developed a technique to use the blood´s Platelet Rich Plasma (PRP) to create a brand new form of breast lift enhancement.

The technique which is said to give a more natural enhancement to breasts, giving them a more pert appearance, uses the PRP mixed with Autologous Fat (or naturally occurring body fats) that are injected into the breasts to give them a much smoother appearance. The theory is that the PRP which is rich in platelets and stem cells encourages the Collagen and Elastin to develop and aid new cell growth - giving the droopy breast a ´revamped´ appearance.

Leading experts are divided about the long-term result of the so-called ‘Vampire Breast Lift’, stating that women can expect modest results at best when compared to the more traditional surgical techniques. However, other experts are divided stating that a certain amount of the fat that are transferred via this technique will be re-absorbed by the body within three to four months. The actual PRP aspect of the procedure may or may not become noticeable depending on the ability of the body to actually stimulate the growth of new blood vessels, Collagen and Elastin on a cellular level (which is again dependent on the body’s ability to manufacture its own biological building materials). This may become noticeable gradually and thus will correspondingly result in breast augmentation over time.

One thing that all cosmetic professionals are in agreement over is that PRP does present an evidence for improving the skin surface and texture of the breast. The bottom line over this controversial procedure is that it is no magic bullet to act as a solution for sagging or a smaller breast size. It may help smooth out breast tissue short term, but the chances are that the body will over time, re-absorb some of the fat and the patient will be back for more fat transfer with some additional financial cost that may well have been better being invested in a more traditional solution.

As always, the best advice is to consult with your Cosmetic Surgeon and ensure that enough research is done so that you don’t waste your precious time and ´hard-earned´ money, but that you don’t risk your health on a procedure that long-term may only concede to being nothing more than a Hollywood fad.

The traditional methods of breast augmentation with implants or autologous fat have stood the test of time and are likely to remain in the limelight for years to come.